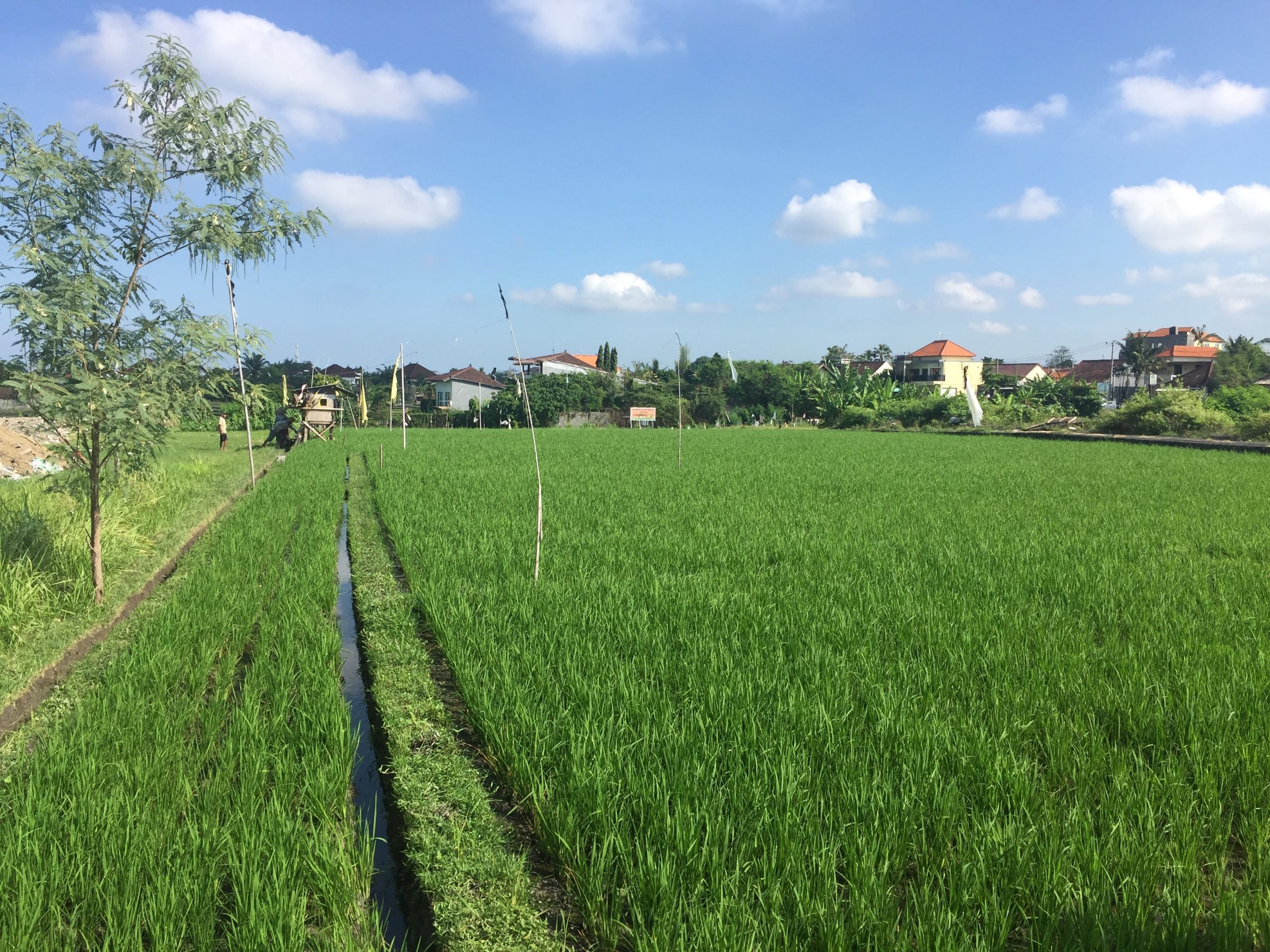 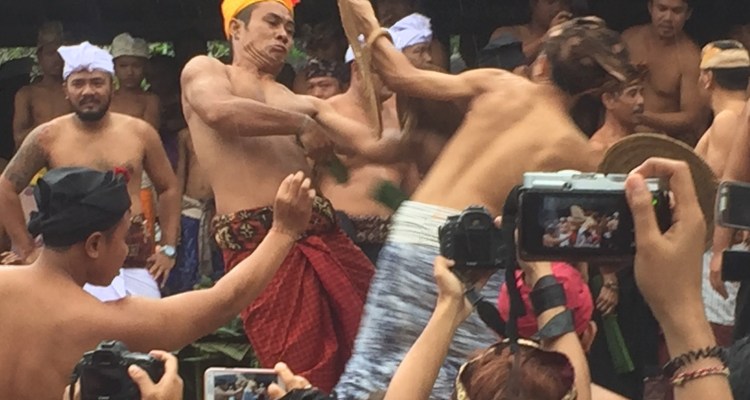 Yesterday we took the day off school and drove 68km to the East of Bali for a unique annual cultural event in a village called Tenganan Pegringsingan (about 5 minutes from the sleepy beach side town of Candi Dasa). Apparently this village before the 1970s was known by anthropologists to be one of the most secluded societies of the archipelago. This area is also known as part of the Bali Aga region where the indigenous people of Bali live.

Click here to watch a wonderful documentary (4 mins) about this unique balinese tradition where villagers fight with cactus like plants.

It was a rainy day and the drive started through the city of Denpasar where we saw the typical Bali day unfold. I couldn’t help but notice at a major intersection seeing a man standing with his traditional Bakso cart (selling soup with fishballs for 10,000k or $1) standing in front of a KFC restaurant that had an advertising banner promoting a Ramadan meal deal. Love the mix of new and old with the acknowledgement of the Muslim population which represent only about 15% of Bali compared to nearly 90% in the rest of Indonesia.

It took about 2 hours to get there and surprisingly we weren’t stuck behind any ceremonies except for a truck jam-packed with watermelons and pineapples for the last ½ hour of the journey. The time went by singing to Ed Sheeran and watching James Corden Carpool Karaoke on my phone (a secret obsession that I love to watch). We drove through ‘poor areas’ according to 9 year-old Liam and closer to the village we came across a ‘Bat temple‘, misty mountains and rice fields.

After an early lunch at a cute little cafe in Candi Dasa, we arrived at the normally quiet village which now was very busy with activity and excitement from locals, visitors and professional photographers from all around the world.

Before we walked in Demi got changed into a colourful Balinese outfit that I bought at the traditional market and I convinced Liam to wear a white shirt on top of his t-shirt, but the deal was it had to be buttoned open.

We learn that it is a mass coming-of-age ritual, dedicated to the Hindu god of war and the sky, Indra, which sees friendly duels between all male villagers, who bout each other armed with a small rattan shield in one hand and a tied packet of thorny ‘pandan’ leaves in the other.

We watched our friend Putu from the village have his second ‘fight’ where his body gets lashes from the leaves’ sharp thorns and he is hurt with bloody scratches on his back, arm and stomach. Yet surprisingly, he shows no pain and has smile on his face the whole time. It must help drinking the local alcoholic beverage beforehand called Tuak (made from fermented coconut) which I had a taste of back at his Uncles house. I am told you need an acquired taste for it but it reminded me of bad wine.

Putu kindly invites us back to his Uncle’s house which is a very simple one-bedroom traditional Balinese home about a 1 minute walk to the main arena where the fighting was taking place on a raised up stage.

We are offered sugar tea and lunch which consists of rice and spicy Babi Guling (suckling pig which was made early that morning) but we politely decline and just have a sip of the tea. In this small humble home (which is an eye opener for Liam and Demi), his uncle has about 15 other villagers who sit together and chat, smoke and drink Tuak. There is also one young man playing on a box shaped drum (I googled it and came up with a Cajon, originally from Spain) and his Uncle is on the guitar. There are also a few young women and kids playing with toys. They all dont speak English and we are quite out of our comfort zone but relish in the opportunity.

We had to wait about an hour before the fights so we ended up teaching the Uno card game (we always bring it with us wherever we go!) to Putu and another friend Wayan who really enjoyed it. The first and only game ended up the longest game ever and didn’t finish as we quickly had to leave and try to and make our way through the huge crowd in the rain and see the start of these historical war dances.

Before the official fights take place there are processions of boys, men and women parading through the village in traditional costumes, yellow and white umbrellas and playing loud festive music. It is a wonderful sight to see and we are literally amongst it all – no taped off sections here!

So back to the fighting, they hold these rattan shields which are mere accessories and scratch each other with a fist full of pandan leaves for about 30 seconds. There is no winner or looser.

Wounds are simply treated with some herbs, yellow and white turmeric and vinegar or coconut oil. We are concerned for Putu who says not to worry at all and he will be alright with the traditional treatment. Today he is proudly wearing a burgundy batik coloured sarong with a dagger tucked in the back.

We werent so close to the action (originally we were a bit apprehensive to see but we knew it was all ok) so I took turns trying to carry Liam and Demi so they could get a better look. Amazing we were among the crowd standing next to the young boys ready to take their turn and go up on stage and ‘play’ fight.

Apart from the ceremonial fights, the village also has a carnival like feel with food stands and villagers selling different crafts.

The kids encountered their first gambling experience when we saw people crowd around a man with a game called “kocok” translated into ‘shake’. Basically there is a large sheet on the floor with 6 squares, each with one picture on it. You place your money on one of the squares (or more if you wish) and then he shakes three pictured dice under a black lid and reveals the winning pictures (it reminded me of a kid friendly roulette game!). We weren’t talking big money like 2,000 (20c) a turn as we saw that was what the other kids were playing with but after having a go and seeing how quickly we could win and then loose it was a good lesson for the kids (I hope).

The other interesting thing in the village are these hand-made wooden swings which look like mini Ferris wheels. I believe the women of the village dress up in traditional costumes and take turns on the swings. We saw four swings all up and they each had about 12 seats. Of course Demi was brave enough to have a turn (there aren’t any seat belts) but luckily they were all locked with rope. I must admit it brought back memories of when Demi age 2 decided to get under her seat belt and stand up at the top of a Ferris wheel at a local carnival! Yep the scariest 2 minutes of our lives!

It took us 2 ½ hours to get back home but the kids were troopers and said they had a wonderful time and understood how special it was to experience such a day.

Thanks Putu for showing us these amazing customs and traditions that still continue in 2017. 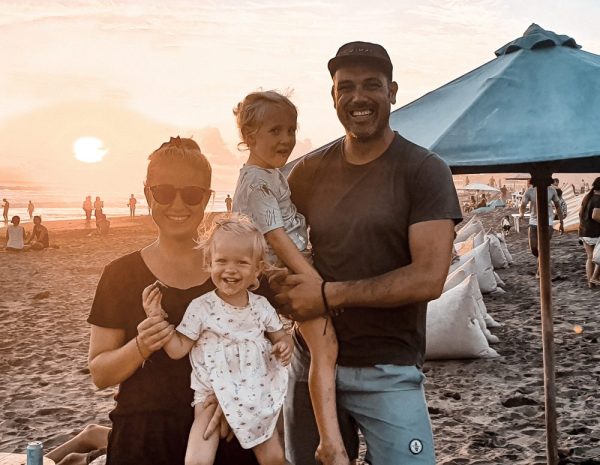 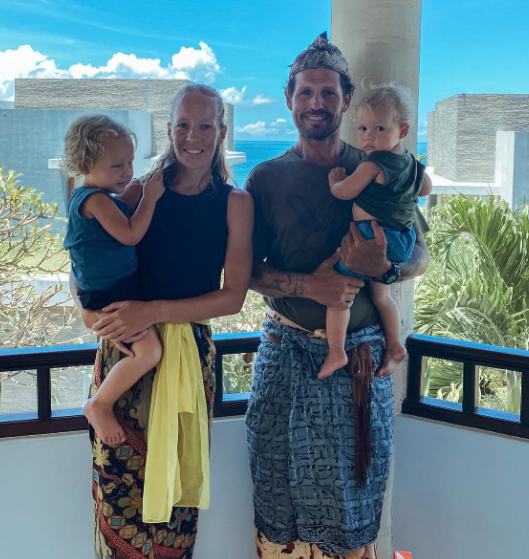 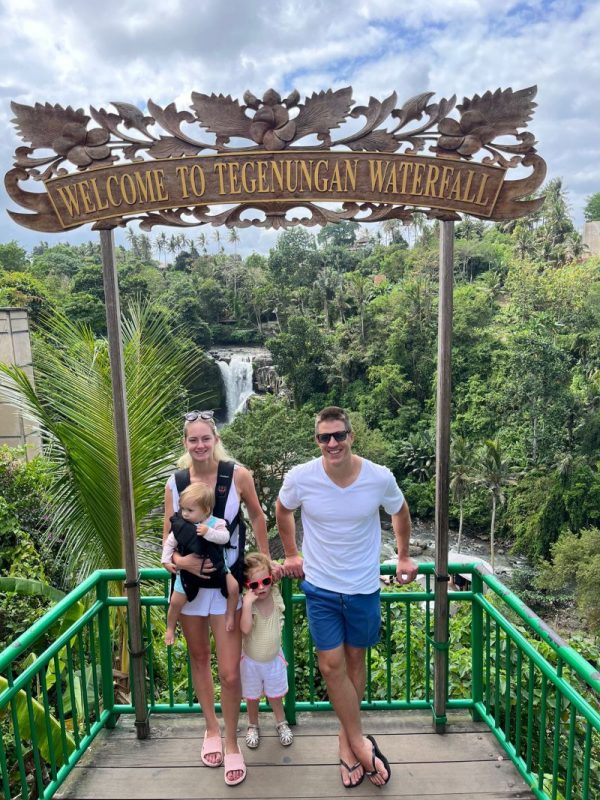 Melbourne family with a baby and toddler move to Bali